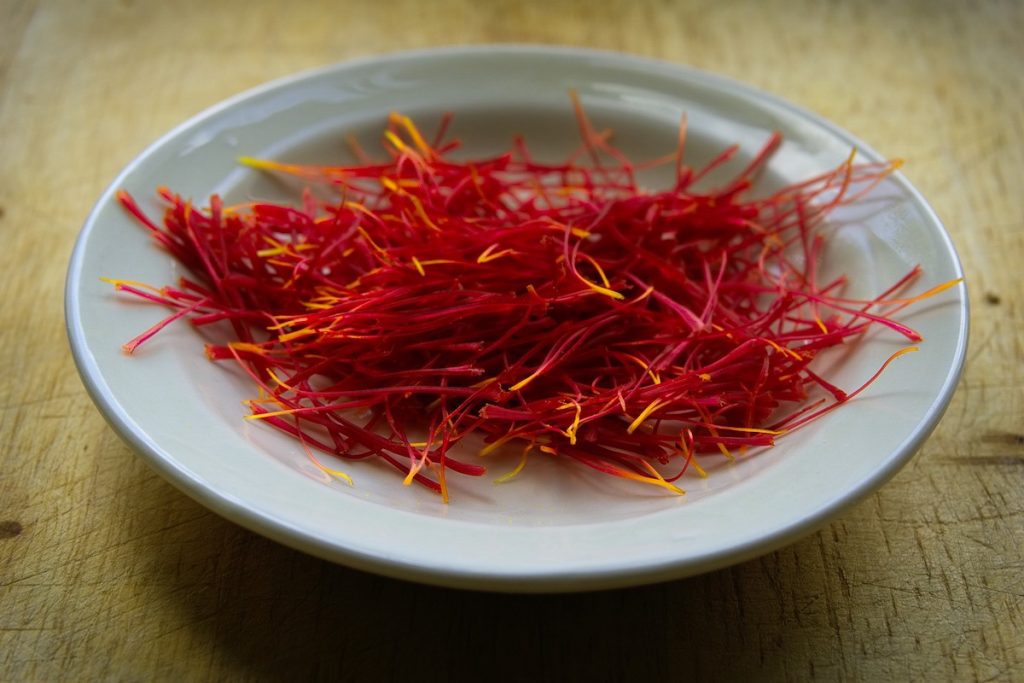 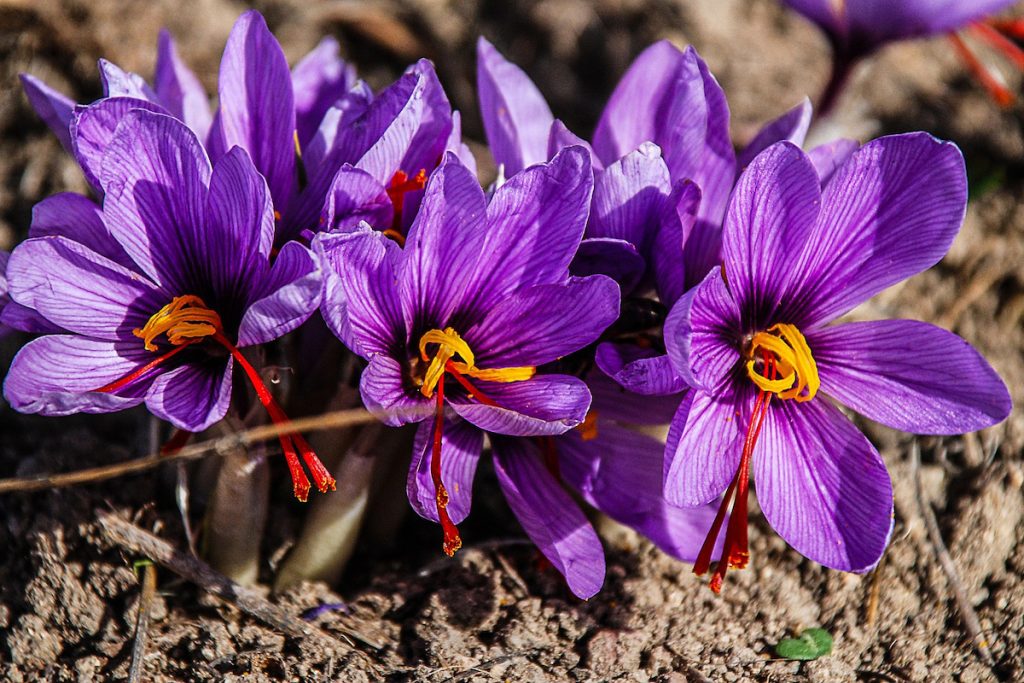 Saffron Crocus is a perennial bulb with attractive, 5 cm, lilac flowers that emerge in autumn and last for just a few days each.  A group a bulbs will flower over a 4-week period with each corm producing up to 3 flowers.  Each flower has three bright, contrasting, orange-red stigmas that are harvested as the world’s most expensive spice.  The name saffron is derived from zafaran, the Arabian word for yellow.  The bulbs are dormant in summer and plants grow to about 20 cm high.

Saffron Crocus requires full sun and deep, rich, neutral, very well-drained soil.  It thrives in a dry Mediterranean climate with cool, dry summers and cold, wet winters.  In SE Queensland, it’s possible to replicate these conditions by growing the bulbs in a terracotta pot.  Bulbs need to be spaced 15 cm apart and planted 5 cm deep.  Place the pot in full sun in autumn and keep it well-watered until the flowers appear (usually after the first frosts).  Then in early summer when the bulbs are dormant, move the pot to a cool, shady spot out of the rain where it will stay dry.  The bulbs don’t like to be over-watered in summer.  A light covering of compost and well-rotted manure can enhance growth and flowering.

The bulbs of Saffron Crocus are best left undisturbed for several years.  They naturalise easily and will enlarge and multiply by producing smaller side corms that can be sub-divided and replanted.  The leaves will turn yellow in spring and provide nutrients to the bulbs to support the developing flowers the following year.  Saffron Crocus bulbs can be purchased from most reputable nurseries in spring and summer. 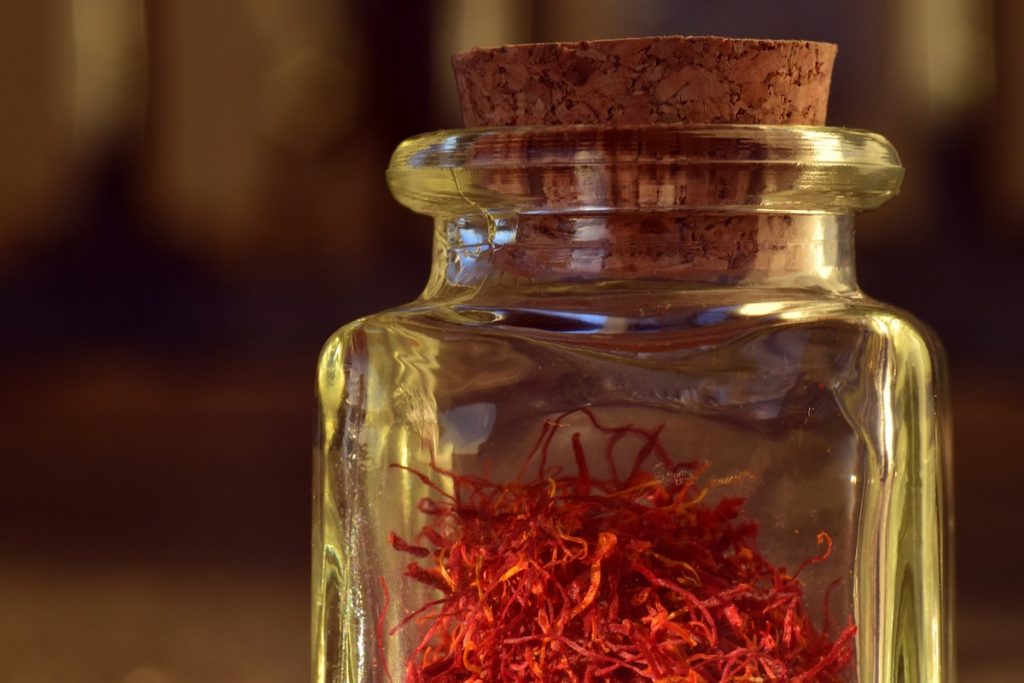 Grassy, bitter and honeyed.  The major flavour compound is Picrocrocin.

When the flowers appear in autumn, the stigmas, which are the three, orange-red strands at the centre of each flower, need to be harvested.  Once harvested, the stigmas are dried for a few days before storing in a tightly-sealed jar in a cool, dark place.  Saffron is best used within one year for the best aroma, flavour and colour.

Saffron is revered for its unique flavour that has been described as a slightly metallic honey with hay notes.  Just a pinch will transform a meal.  It’s important to note that only the stamens are edible; the leaves, flowers and bulbs are poisonous if eaten.

Saffron is perhaps best-known for its distinctive flavour and bright golden colour, but the dried saffron needs heat and hydration to draw out its full aroma, flavour and colour.  The most common way of adding saffron to a dish is to first steep it in a tablespoon of hot water or milk for 15 minutes.  Recipes that have a lot of liquid such as soups can have saffron added directly without the need for blooming in water first.  Saffron can also be ground in a small mortar and pestle with a teaspoon of sugar as an abrasive to create a fine powder.  Then the powder is dissolved in a little hot water to become intensely aromatic and a deep orange-red colour before adding to other ingredients.

Saffron partners well with rice, lamb, fish, shellfish and earthy vegetables such as carrots, leeks and potatoes.  It’s traditionally used with preserved lemon in Morocacan-style tagines, to flavour yoghurt marinades for slow-roasted lamb, and as an ingredient in Spanish paellas, Iranian pilaus, Indian biryanis, Italian risotto and French lobster bisque and bouillabaisse.  Alternatively, it can be used to infuse milk to poach fish or to make custards and desserts.

Saffron is indeed a luxurious spice, but fortunately it’s easy and inexpensive to grow and harvest at home.  In terms of weight, Saffron is worth more than gold; this price is due to the labour-intensive harvesting processes.  It’s estimated that 180,000 flowers are needed to produce one kilogram of the delicate flower stigmas, and at the present time, 90% of the world’s saffron is produced in Iran in the Khorasan Province.

Saffron is a powerful spice that is high in antioxidants and has been linked to health benefits including enhanced mood.  Its distinctive flavour comes from the chemical compounds picrocrocin and safranal.  Saffron also contains a natural carotenoid crocin which creates its golden-yellow hue.  It’s an excellent source of the minerals copper, potassium, calcium, manganese, iron, selenium, zinc and magnesium, plus vitamin A, folic acid, riboflavin, niacin and vitamin C.

High doses of Saffron can act as a uterine stimulant, so pregnant women may be advised to avoid this spice in their diet.

Saffron is also used as a yellow dye, and it is believed that Cleopatra liked her bath scented with saffron.  The yellow stamens and the lilac petals can also be used to dye natural fabrics and yarns. 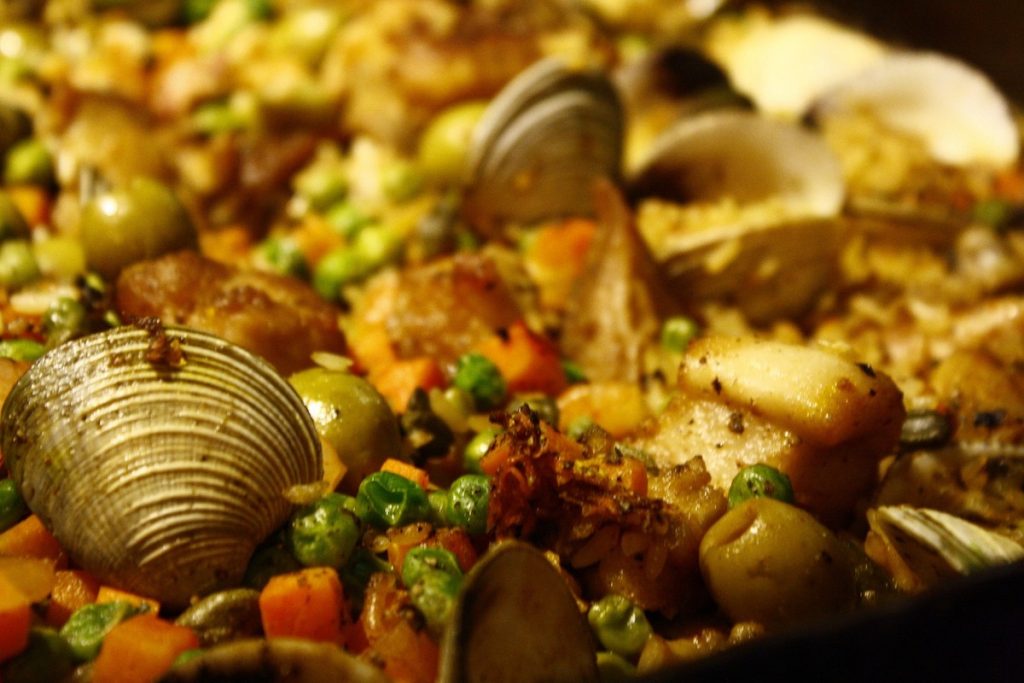 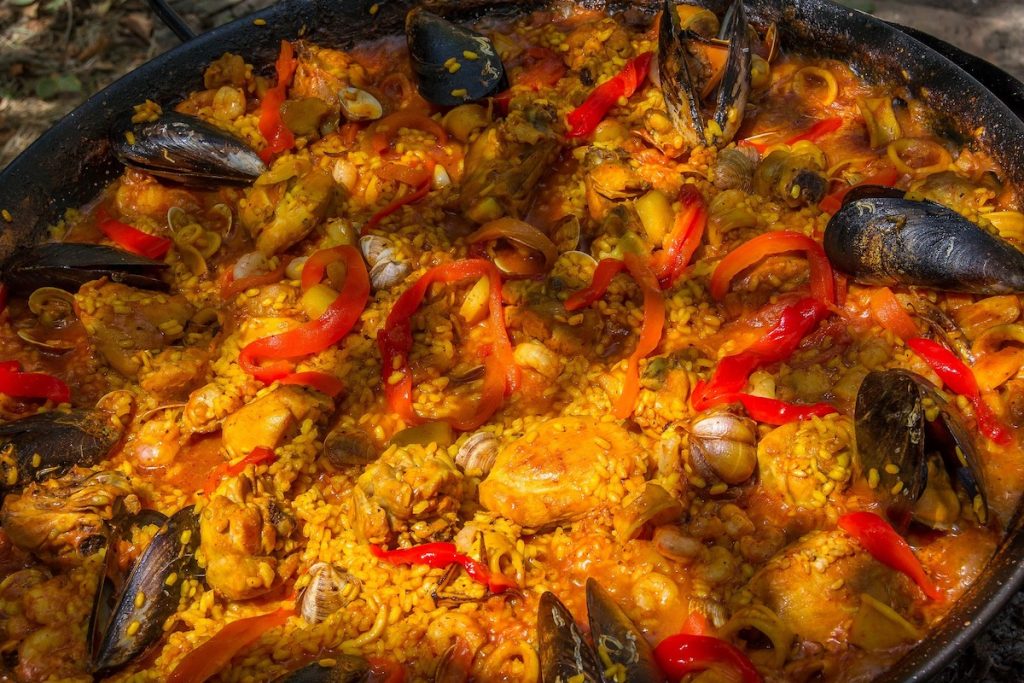