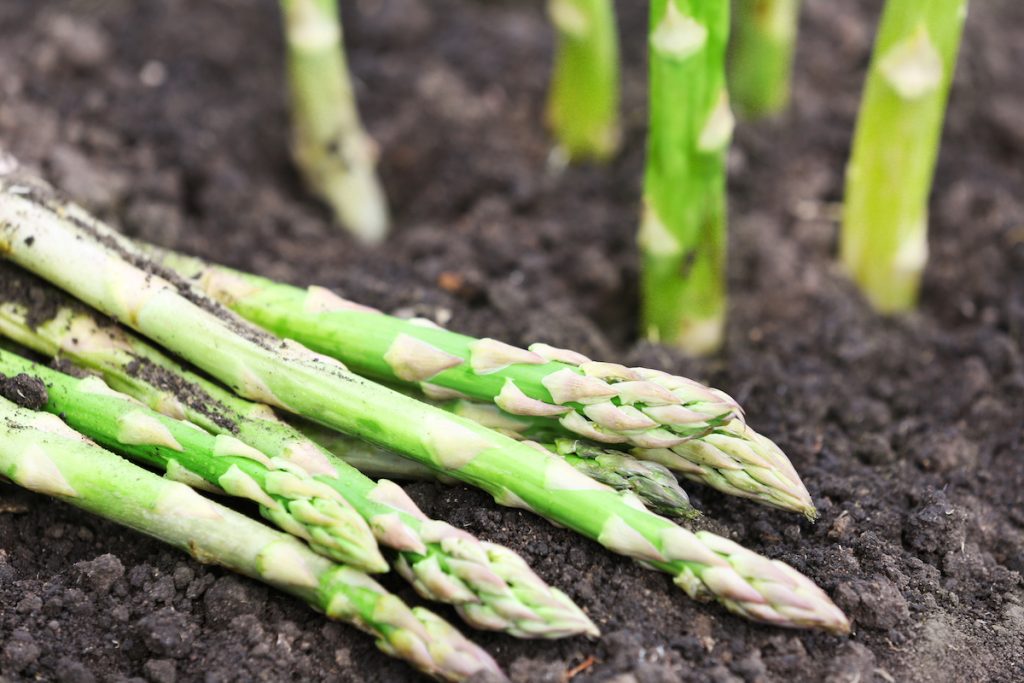 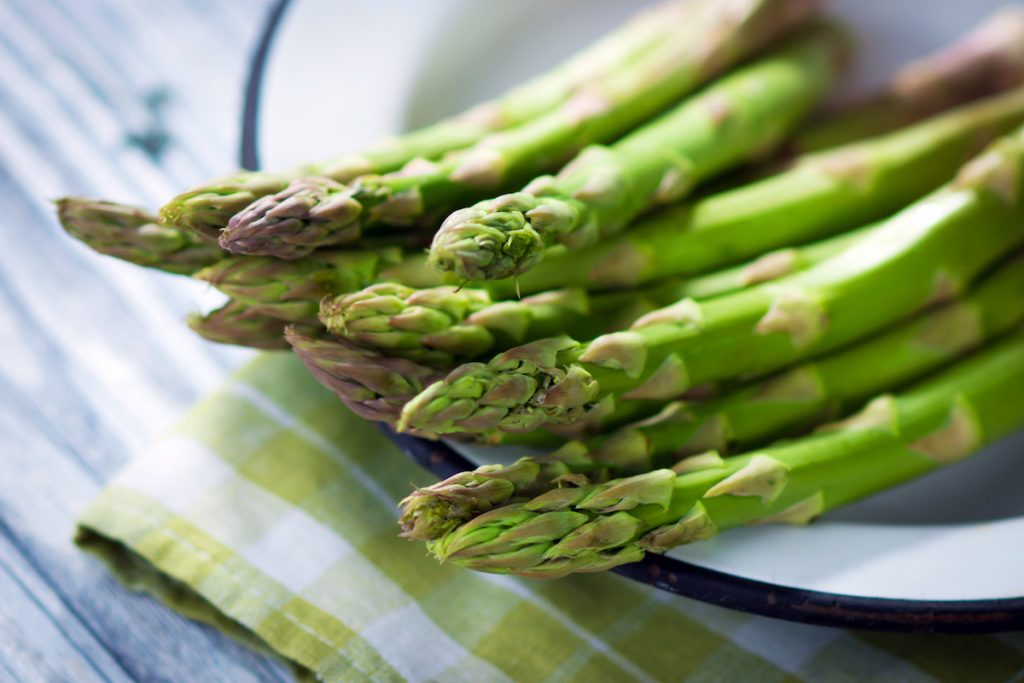 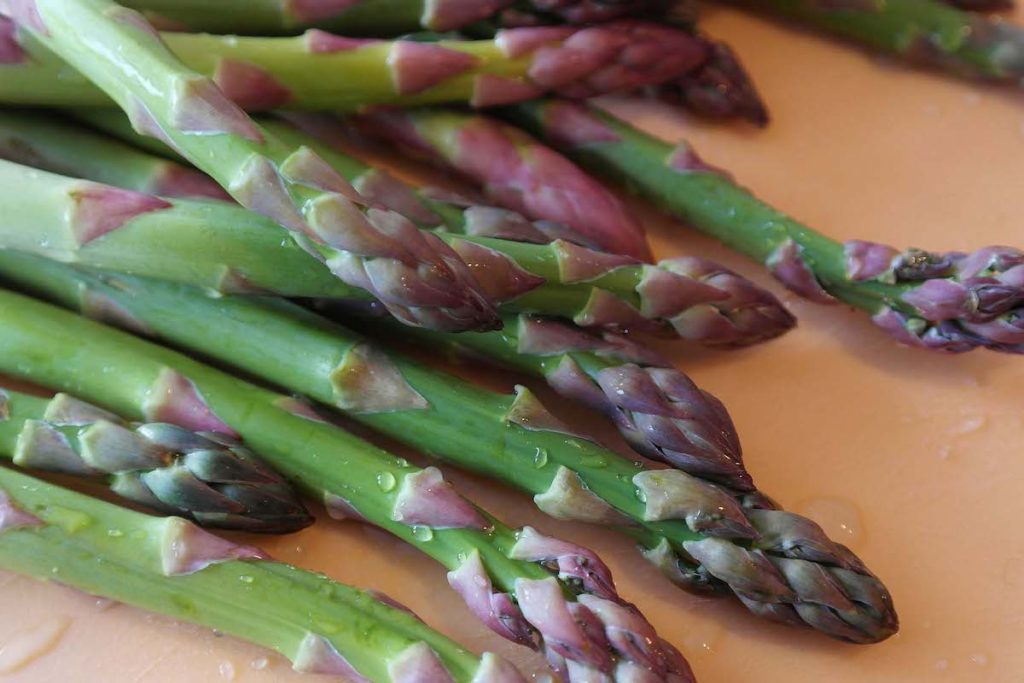 Asparagus is a hardy, long-lived, winter-dormant, herbaceous perennial with ferny growth to 1.5 m high.  Its young shoots or spears are widely used as a spring vegetable crop.  Asparagus is usually dioicous and has both male and female flowers on separate plants.  The male plants produce more spears and the female plants produce fewer but slightly larger spears.  It has small bell-shaped, green-white flowers followed by small red berries that are poisonous to humans.

Two varieties that grow well in our garden in the Lockyer Valley are Mary Washington and Purple.  Mary Washington is a hardy, prolific asparagus with thick, delicious spears.  It’s also a rust-resistant, male dominant variety that grows stalks rather than large quantities of seeds.  Purple Asparagus is one of the oldest varieties dating back to France in the 1860s.  It produces sweet, thick, rose-purple spears that are ready to harvest in the second year.

Asparagus is a temperate plant that requires full sun, well-drained soil and cool to cold winters.  It thrives in deep, well-prepared soil with generous amounts of compost and well-rotted manure; however, it dislikes tropical humidity during summer.  Plants take 2 to 3 years to establish before the tender young spears can be harvested every year in spring.  Individual plants will live for 20 years if undisturbed, so it’s a good idea to position them with this in mind.  Prepare the soil in advance to ensure good drainage and nutrients for the crown.  Asparagus is extremely hardy and is both frost and drought tolerant and has no common pests or diseases.

It’s best not to harvest any Asparagus spears during the first year after planting because plants need to put all their energy into establishing deep roots.  During the second season, harvest only the thickest spears very sparingly over a four-week period, and by the third year the full harvest can be extended to 2 to 3 months.  In early spring, spears can be harvested every couple of days but as the weather warms it’s usually possible to harvest twice a day because spears grow so quickly.  Cut Asparagus spears with a sharp knife or snap off the spears at ground level.

After harvesting the spears, some of the attractive, fern-like foliage should be left on the plant because it benefits overall productivity.  This foliage helps to increase future stalk production by providing the crown with nutrients and also by shading the crown in summer.  Crowns can be divided after 3 years if needed.

When the foliage turns brown in winter, the long dry stems can be cut back to just above ground level and top-dressed with compost, well-rotted manure and thick mulch.  Delicious, young, tender spears will then emerge again in spring and are best harvested when 20 cm long, at least pencil-thick and before they start to branch.  Very thin spears are best left to develop and feed the crown.

Asparagus plants can be propagated by lifting and dividing the mature plants during winter dormancy.  These crowns can then be planted about 45 cm apart in rows with 1.2 m between each row.  Bare crowns can also be purchased from nurseries in winter.  An economical way to grow Asparagus is by seed, or from small seedling plants purchased at nurseries, however these can take much longer to produce the first edible crop of spears.  New seedlings will also self-seed and grow from the red berries when they drop to the ground. 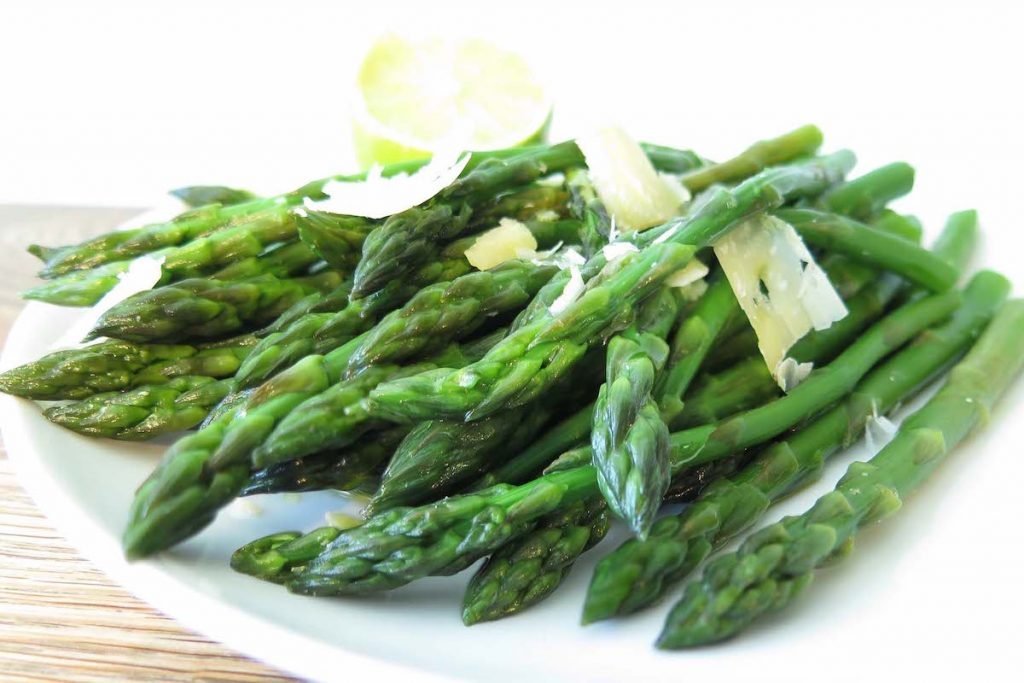 Asparagus can be enjoyed both raw and cooked.  It is rich in essential vitamins, minerals and antioxidants including potassium, B vitamins, vitamin C, vitamin K, calcium, iron, folate and fibre.  It begins to lose its sweetness as soon as it’s picked so it’s best to eat or cook immediately if possible.  Asparagus has many culinary uses and is often served in soups, salads, stir-fries, frittatas, quiches and pasta, grilled with egg or lightly sautéed in butter.  Asparagus can also be pickled and stored for 12 months or more. 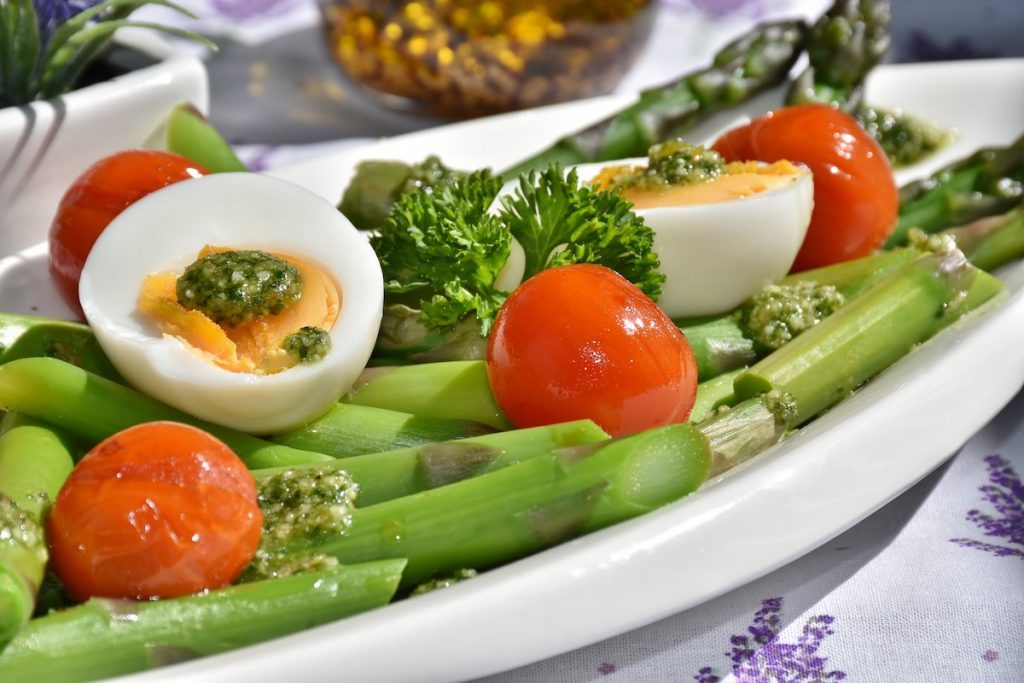